This article is about the update that was released on December 5th, 2018! For the article about the in-game event in the Demolition derby discipline with the same name, please visit King of Mayhem! 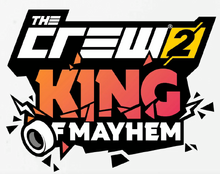 King of Mayhem was the second set of free updates released in The Crew 2 on December 5th, 2018. The announcement of the King of Mayhem update DLC was first teased in the Gator Rush DLC launch game stream on TheCrewGame's Twitch channel on September 25th, 2018, where the development team asked the community to guess what the meaning of the update was.

On November 27th, 2018, a teaser trailer for Demolition Derby was uploaded to Ubisoft's YouTube channel confirming its appearance in the upcoming King of Mayhem DLC. The following day, on November 28th, a more detailed news post was published on The Crew's website revealing more of the contents in King of Mayhem.[1] A follow-up maintenance was released on December 12th, 2018 fixing some issues that occured with the update.[2]